Inspired by an old children’s poem. This one at first glance seems like quite a departure from my normal children’s illustration style, but all I am doing is using a more opaque colour palette and removing much of my line work. Sometimes small things can have a profound change on your illustration style.

Playing around with the textures was fun too. Enjoy!

Fall is fast approaching and that means figuring out what to do with the annual Christmas Cards will soon be upon us!

Here is a collection of the various cards I’ve helped put together over the past few years. My wife comes up with the ideas for these as she is the pro photographer in the family, and then leaves the bulk of the actual design to me. She even trusts me to retouch them as well! Rare praise from a photographer (they generally don’t like the somewhat hamfisted way we designers often abuse our Photoshop privileges). My only input into the photos is to act as kid herder, be a voice-controlled light stand, and keep my big feet out of the shots. You think the first two are hard, try that last one. Big feets!

So a long time ago now, I created this super hero character with the emphasis on a somewhat realistic and less sexualized costume. While I never did what was intended with the character, I liked it and developed her a bit further, trying out different styles and slightly adjusting the costume a bit. This is the most cartoony style I have tried so far (and am willing to share).

This would be early in her career as a crime fighter. Before she had a real handle on her powers. All derived from the gauntlets she wears. The inks were done traditionally, with the colour dropped in on my iPad and a little tweaking to the background and overall colour in Photoshop. Enjoy!

Women of my age are usually out with the kids (or even grandkids). or are out for an evening date night at the coffee shop with their significant other. Maybe even a book club.

Me, I’m in deep space orbiting a red giant star system, relieving a rival band of privateers of their iridium ore. Brandishing my vibro-sword rather than a cup of herbal tea, or ethically sourced java. And swearing… like a pirate… instead of polite, urbane discussion about the weather, or local politics.

With choices like that, I’ll take the pirates any day!

Another attempt at the sci-fi and fantasy covers I enjoyed in my youth. This was a fun take on space pirates. Learned a lot on this one. Especially patience. Enjoy! Years ago, my son loved, loved, loved How to Train Your Dragon. We watched it back to back for days on end. He used to call the show “Birds” with impunity. He was around 2 at the time so I guess he can be forgiven.

It was around then I drew a bunch of dragon heads in a similar style. Four years later I finally got around to doing something with them.

A more muted palette than I usually work with. Was a challenge to keep things fairly loose. Enjoy! 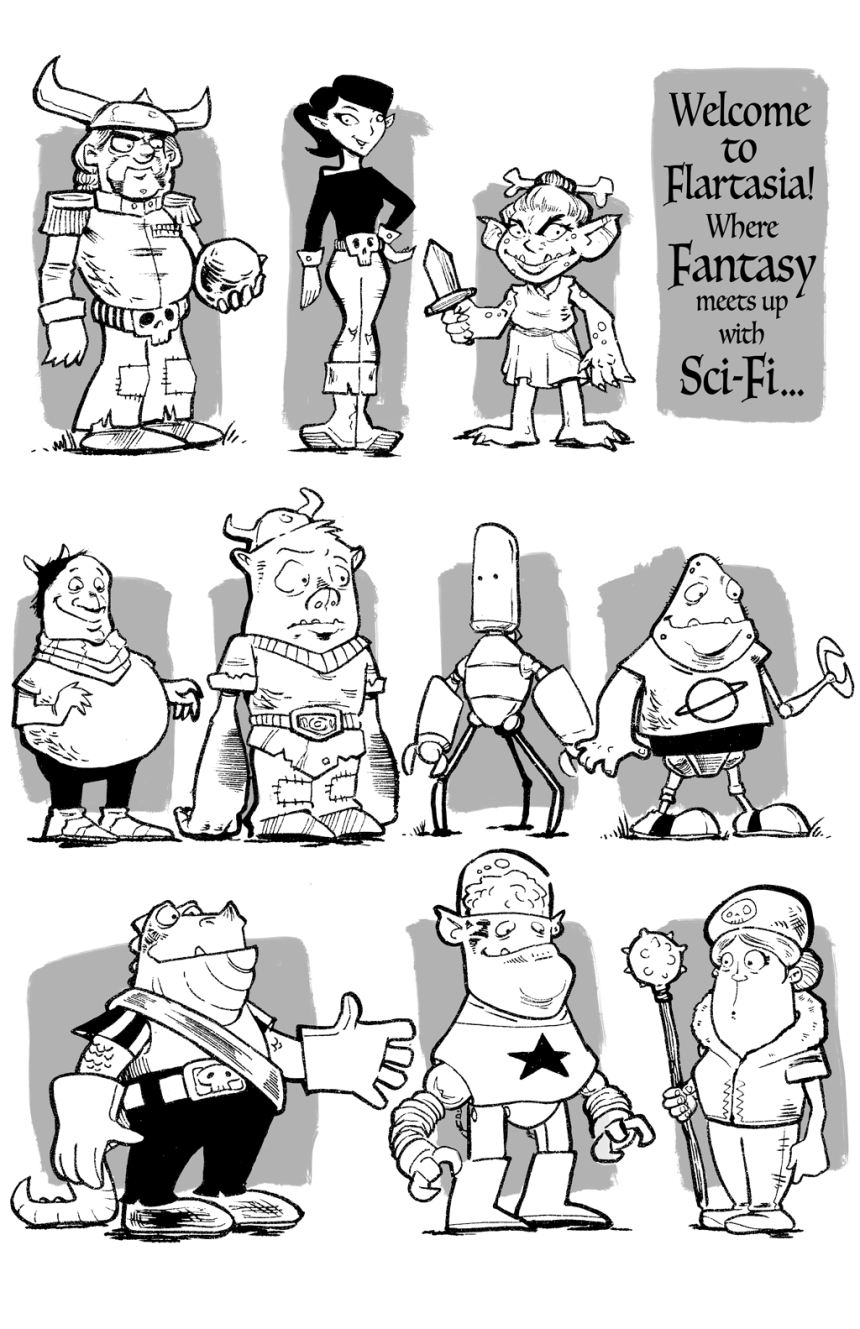 As I’ve mentioned in the past, I was never allowed to play DnD as a kid. But I used to spend hours pouring over the artwork in various Monster Manuals for AD&D and other popular role playing games of the 80s and early 90s. I especially liked Shadowrun for some reason. I also read Sc-Fi and Fantasy voraciously as a kid. I still try to pick one up now and then.

So here’s a lineup of various cartoon fantasy players. I tried to make them as silly and friendly as possible. Using Bill Waterson of Calvin and Hobbs fame and the Etherington Brothers of various British comics as guideposts for developing these guys. Lots of silly fun! Enjoy!