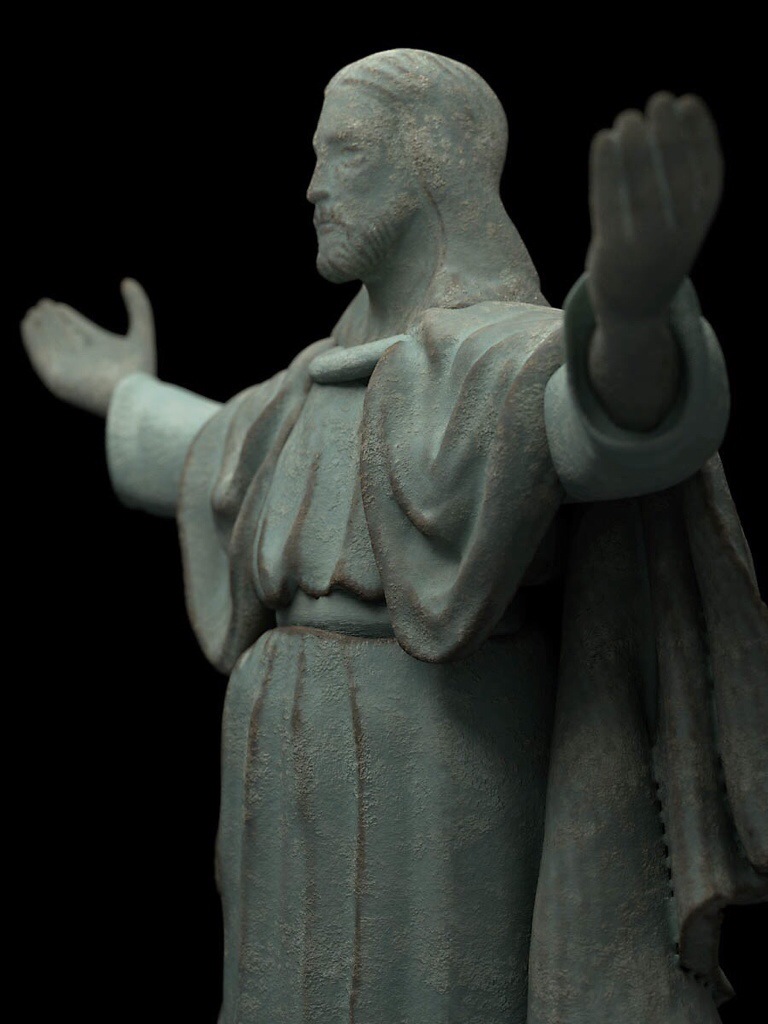 It’s been awhile since I blogged about my experiences in 3D printing. Several months ago I found out a close friend of my family (and one of my son’s godparents) would be going away to Seminary to become an Anglican priest. Since he had been such a big part of both my wife and son’s life, I thought he should get something personal from us as a going away present. and since he was also the Organist and Choirmaster of our Church, I wanted to get something good.

Our Church has, in my opinion, a rather nice Sacred Heart Statue in the Sanctuary, and I thought it would be a nice gift to have a small replica made of it. The statue itself is quite detailed, and looks like some sort of Victorian Era sculpture or some sort of similar knock-off style. Apparently made locally here in Winnipeg. Compared with other photos I have seen of Sacred Heart Statues, it is quite nice. So nice in fact, I was pretty certain that an exact copy would be beyond my meager 3D skills, but I thought it would be a good learning experience. I also thought it would be an appropriate reminder of our Church, St Michael and All Angels, while our friend Andrew was away at Seminary. I also thought that I had at least two years to figure out how to do it. Plenty of time.

Turns out Andrew took some summer session University courses to get enough credits to get into Seminary a whole lot faster. I suddenly went from having years to only a couple of months! And to make it worse, I would be doing most of the modeling during Lent when the statue would be covered up for a good part of the time. I had to rely on some incomplete photo reference. And that the model probably wouldn’t be a completely faithful reproduction. 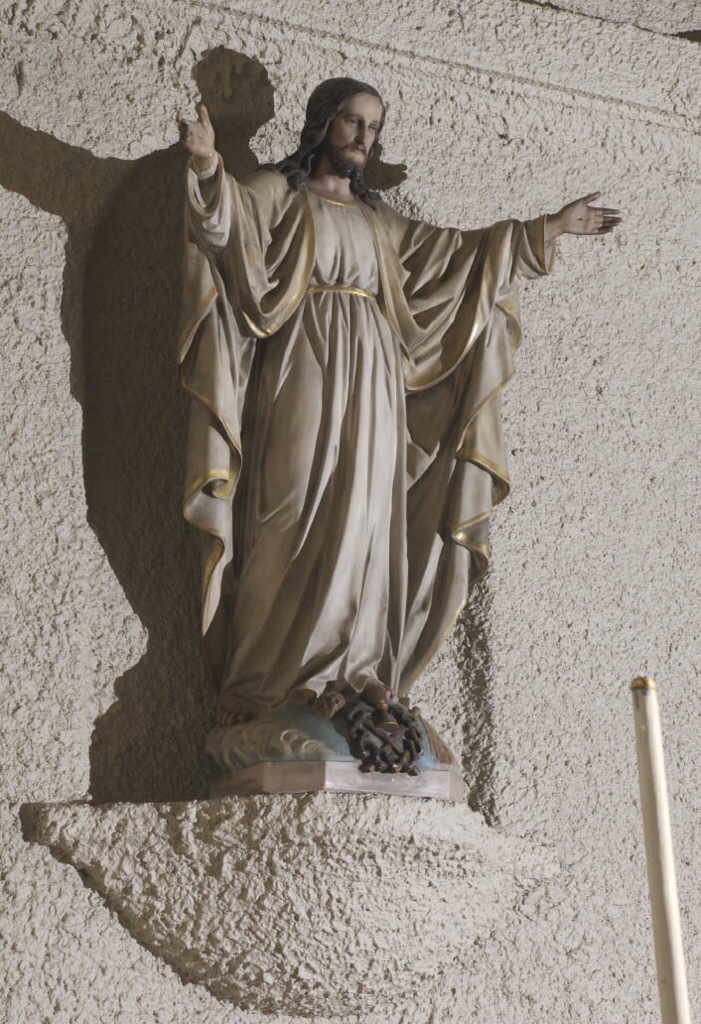 This was the best reference I had. This three-quarter view shows lots of detail, but a profile and front view would have been better.

After gathering what reference material I could, I set up a file using
Blender. It was the 3D program I was most familiar with and I felt that the program’s sculpting tools would get the job done.

I started modeling the core body first. I feel this is the part of the model that is most accurate to the original sculpture. It started out as a cylinder that I then applied a few basic transforms to get closer the the type of folds I needed. Then I used the sculpting tools to add the necessary details. The arms were fairly easy to make and the hands I borrowed from a free 3D model I found on the’Net. The face was actually pretty easy for me as I already had some experience modelling the human face.

The chausable* was another story. Getting the folds correctly was proving difficult, and I was running out of time. I knew Blender had a clothing simulator, and after going through a tutorial online (thank God for YouTube!) I settled on using the clothsim to help me with the folds.

By this time, I had Andrew’s fairwell date. I only had one shot to make this work. Normally, I would have printed the model out in a cheap plastic or resin to make certain that my model was working the way it should. Even though I was working with a 3D program, I am only ever really seeing a two dimensional representation on the screen. The only way I would know for certain everything was fine would be to see it as a proper object in real life. Since I had settled on a raw bronze metal, I wouldn’t have the time to print out a plastic test model first. So I ordered the metal print on Shapeways…

I settled on a raw bronze as I knew that the material would age over time and form a patina. Anyone who has watched antique shows or any of those pawn broker shows on A&E knows patinas are a good thing, and I thought the patina would add some character should my model prove to be slightly sub standard. I also thought the rough texture of the bronze might hide a lot of flaws as well.

When the 3D print arrived I was was generally quite happy with it. There was one flaw with one of the hands though. While it was in the proper position, it was a litle too twisted in one direction. Not a deal breaker, but it would have to be addressed should I ever make the model available for printing for the general public. As for the patina, only time will tell, but in certain light, you can already see a slight green tinge appearing. The renders in this post are simulations of how I imagine the model looking after several decades of use.

I learned a lot while modeling this piece. I intend to return to this piece again once I have gained some more skill in using the sculpting tools in Blender. Maybe I will be able to get a closer resemblance to the original and maybe not rely on a clothing simulator. 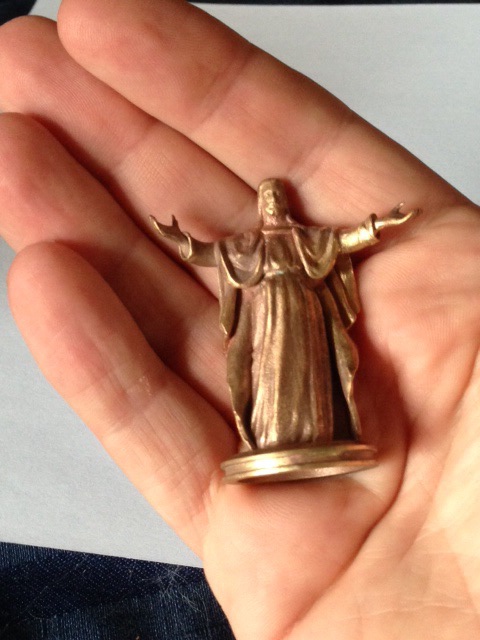 Showing the size of the final object.

*I am not much of a religious scholar and I may not be using the proper terms.